A friend was talking about a copycat recipe for Cafe Rio’s Seweet Pork Barbacoa, so I decided to scour the web and Pinterest and find a recipe.  There are so many recipes out there, and many of them are very similar. What I noticed is that each person seemed to tweak their recipe a bit in order to come up with their version of the delicious meat.  I found myself doing the same thing.  My friend’s recipe that she received from someone years ago, called for Coke originally, but she swapped Coke for Dr. Pepper and as it is noted in her printed recipe, it really is “better”.  So my first decision was to use Dr. Pepper for sure, and then add what I thought might be right.

The recipe that I came up with, doesn’t require cooking or marinating over night.  My recipe is also a little less time consuming than some of the recipes outs there.  The pork was delicious, sweet, tender, and full of flavor; I wouldn’t change a thing.  My kids order the Sweet Pork Barbacoa whenever they go to Cafe Rio, and they thought it tasted very similar.  Their only comment was that it was a little less sweet than the restaurant version, but that they actually liked that the meat wasn’t so sweet. 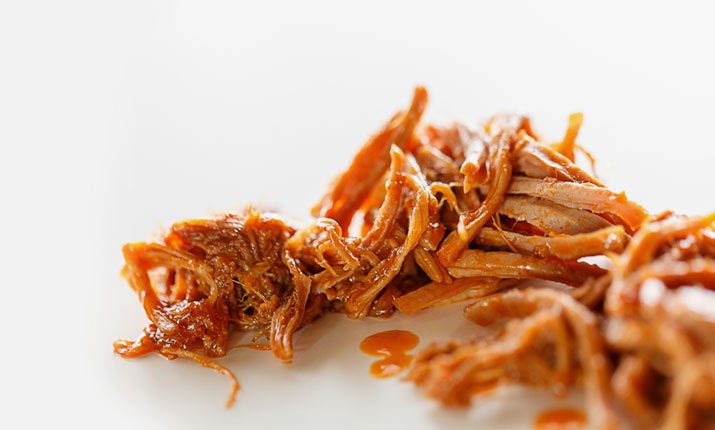 Ingredients for the sauce:

Place the roast in a slow cooker.  Add the Dr. Pepper and then the brown sugar, garlic, dry mustard, cumin, cayenne pepper and pepper.

Let the meat cook for at least six hours, or until it is tender enough to be shredded. When it is ready, >pull the meat from the slow cooker and place it on a cutting board.  Cut off any fat and shred the meat.

In a blender, make the sauce.  Add the enchilada sauce, green chiles, Dr. Pepper and brown sugar.  Blend until smooth.

Drain the juice from the slow cooker and the put the shredded meat back in cooker along with the sauce.  Cook on low for 1 1/2 to 2 hours.  You want the meat to soak up the sauce.

Use the meat to make burritos, tacos, quesadillas, or serve over rice or salad.

Searching is in progress